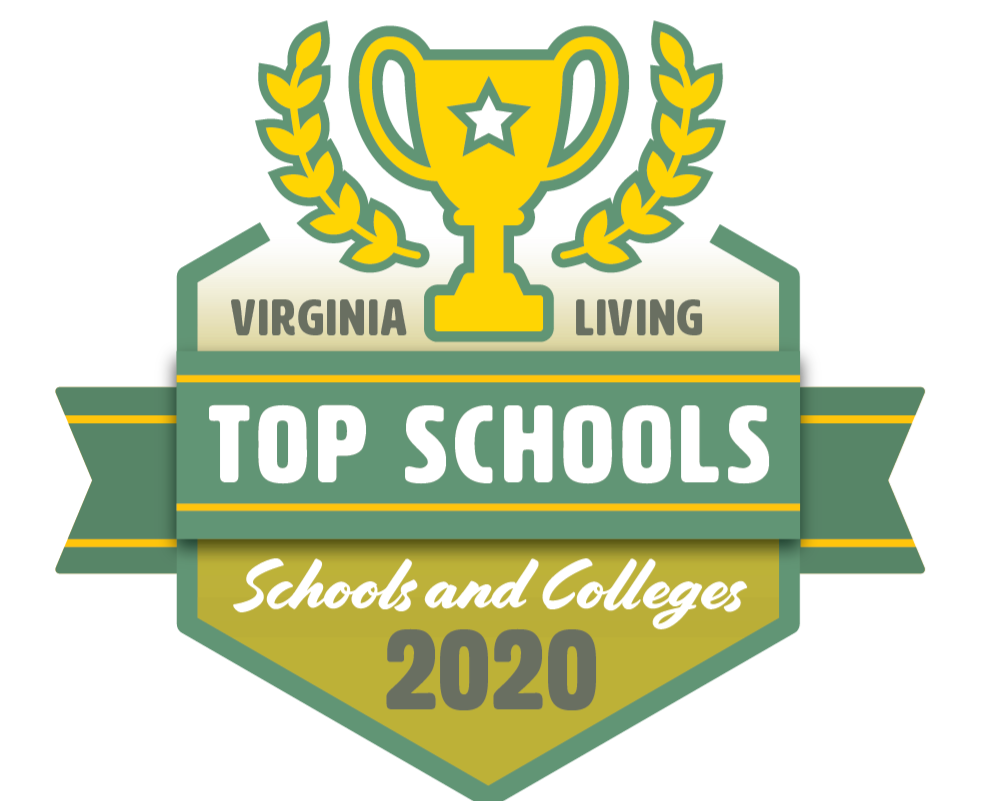 Hargrave Military Academy will feature in the April edition of Virginia Living, an upscale lifestyle magazine with a readership of over 500,000. The 2020 State of Education special will feature in-depth coverage of news and trends in education as well as celebrate excellence and innovation in Virginia schools. To be selected, the magazine's editors review schools that have instituted innovative programs or recently begun capital improvements aimed at strengthening students' experience in the classroom, in the field, or in their communities. The edition will also include Top Schools & Colleges 2020, a list of more than 160 contemporary programs in schools across the state. Virginia Living’s Top Schools & Colleges 2020 is the resource for anyone interested in knowing why Virginia’s schools are consistently ranked among the country’s best. Virginia Living’s April 2020 issue will hit newsstands March 13.

Alumni Gift Takes Maintenance to the Next Level!

As you can imagine, our physical plant crew is always hard at work with cleaning, repair, or preventative maintenance.  When equipped with the right tools, they can really get the job done!  Bob White, trustee and graduate of the class of ‘76, graciously donated the funds for an industrial hot water pressure washer.

The first project under that "hot scrub" was the Landon Tennis Center .  Our cadets will use the courts during the upcoming Spring season and Summer Program. Additionally, the facilities are used by Chatham Hall, community tennis, staff, and alumni.  The Center features six lighted tennis courts and an enclosed rebounding wall.

Other projects around the school will benefit from this new equipment.  Thank you Mr. White! 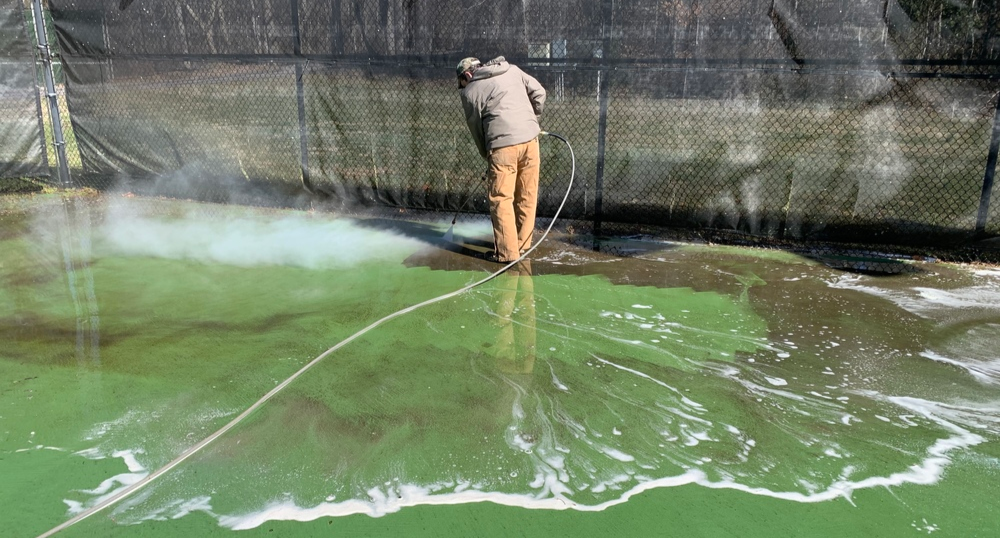 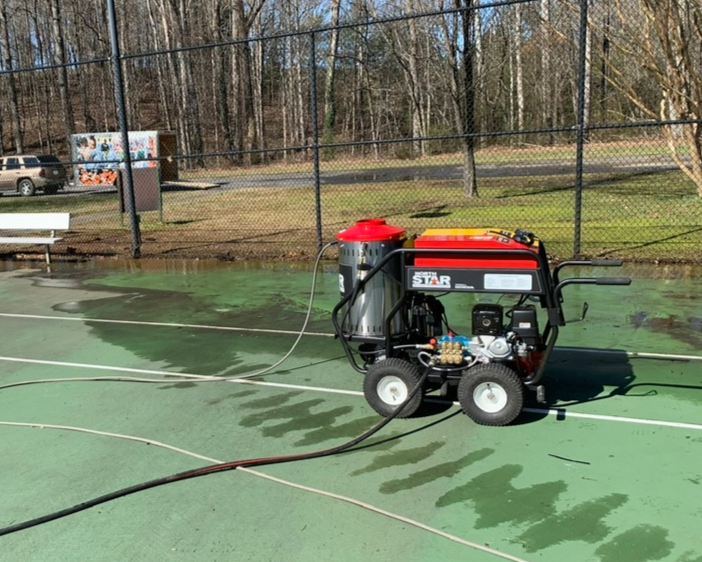 President's List Honor Roll - Qualifying Cadets maintain all grades at B+ or above in a grading period, including both the military grade and the classroom performance grade:

Dean's List Honor Roll - Qualifying Cadets maintain an overall GPA of 3.3 in academic classes and have not received any grade below a C in a grading period, including both the military grade and the classroom performance grade:

President's Commendation List Honor Roll - While taking fewer than six traditional academic courses, qualifying Cadets maintain an overall GPA of 3.3 in academic classes and have not received any grade below a C in a grading period, including both the military grade and the classroom performance grade: 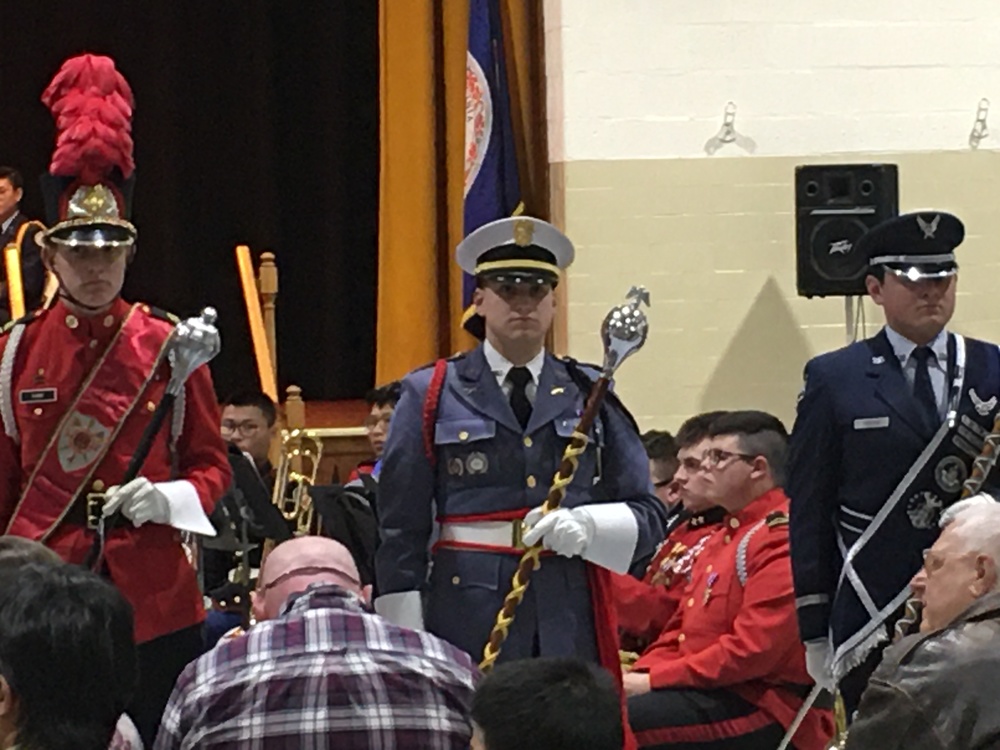 February Athlete of the Month 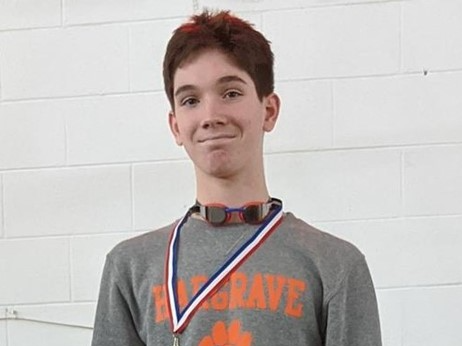 Andrew Bolz '24, a native of Woodbridge, Virginia, entered  Hargrave at the Semester break and immediately earned his stripes in the pool. Bolz bolstered an already impressive Hargrave Swim Team which finished second in Conference and sent a large number of swimmers to the State meet.

Bolz was recognized as the VIC Coaches as the VIC Swimmer of the Year.  At States, Bolz closed out the season with a 5th place finish in the 200 Individual Medley and 6th in the 100 Backstroke.  He was a member of relay teams that finished 10th overall in the 400 Freestyle Relay and 12th overall in the 200 Medley Relay.

The Hargrave Junior Retreat is scheduled for April 17-19, 2020 at Camp Weaver, NC (https://campweaver.org/). The retreat is a pinnacle event for our Juniors.  The experience is designed to challenge, inspire, and build a cohesive Junior class prepared to lead the Corps of Cadets through the 2020-2021 academic year. The weekend is filled with fun, discovery, class bonding, spirituality, self-reflection, and designed to build camaraderie, effective communication, self-confidence, learn about each other, and feel affirmed.

We ask parents, family members, friends, or guardians to provide a letter of encouragement to our Juniors to be given to them in a private session on Saturday evening, April 18, 2020. The letters could include an affirmation of their past, present, and future endeavors, some guidance or life lesson, and a message of support as they begin to prepare for the challenges of their senior year (approaching the "launch point" as leaders of character prepared for lifelong success) Letters should be mailed to Laura Agnor, Hargrave Military Academy, 200 Military Dr., Chatham, VA 24531. 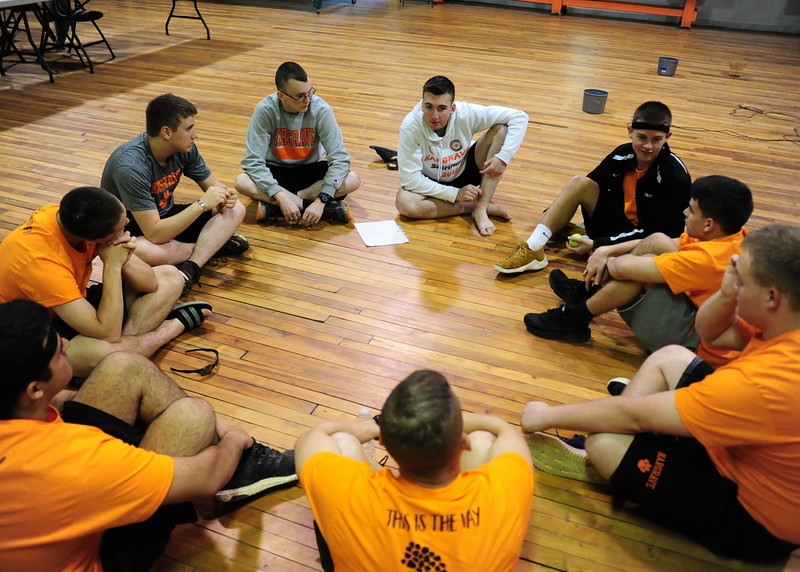 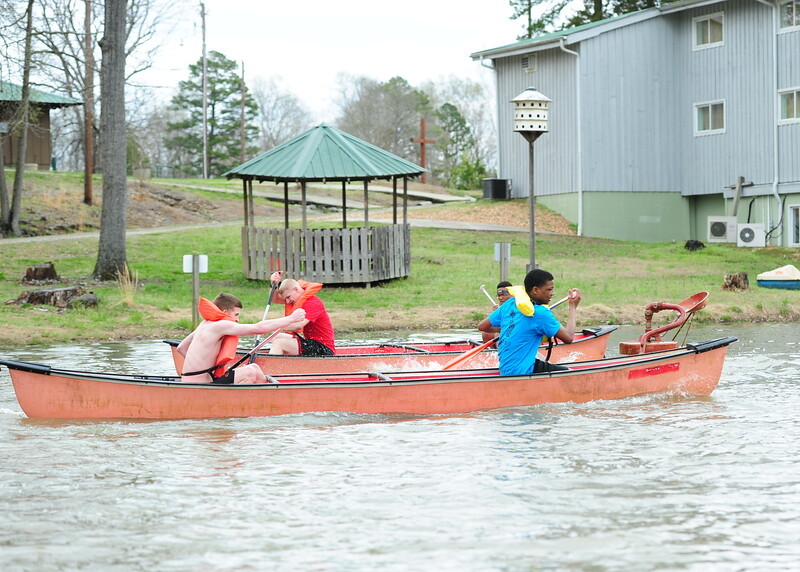 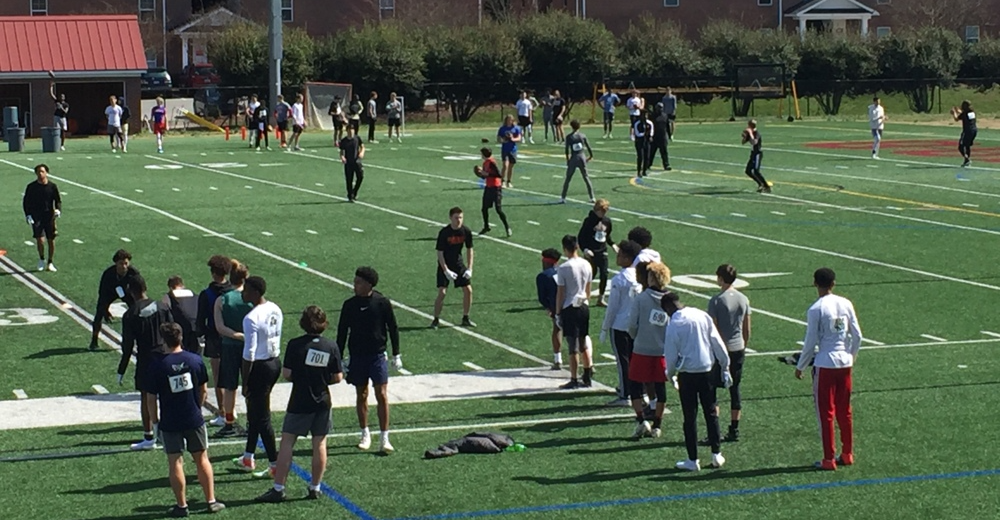 This is a new Text block. Change the text.

President's Leadership Award (Upcoming Event)
The Center for Leadership and Ethics will host the annual Hargrave President’s Leadership Award selection on Wednesday, March 18, 2020. The President’s Leadership Award was established to recognize a rising Senior that best represents the four Pillars of Hargrave Military Academy, to include, Academics, Athletics and Fitness, Character Development, and Spiritual Growth. The students selected to compete for this prestigious award are nominated based on their overall character, and the leadership potential to lead the corps of cadets at a higher level. Each nominated cadet will present himself in full chapel uniform before a military style Board comprised of a panel of senior staff and faculty members. The candidates will be graded on their overall appearance, bearing, personal biography, general knowledge of Hargrave policies, and the ability to address the panel in a confident, articulate, and intelligent manner. The 2020 candidates for the President's Leadership Award are: Gage Crisp, Nathan Higdon, John Mauriello, and Jay Thompson. The winner of the award will receive a certificate of achievement, President's Coin of Excellence, an officer's sabre engraved with their name, and an opportunity to better position themselves for senior positions within the corps of cadets. 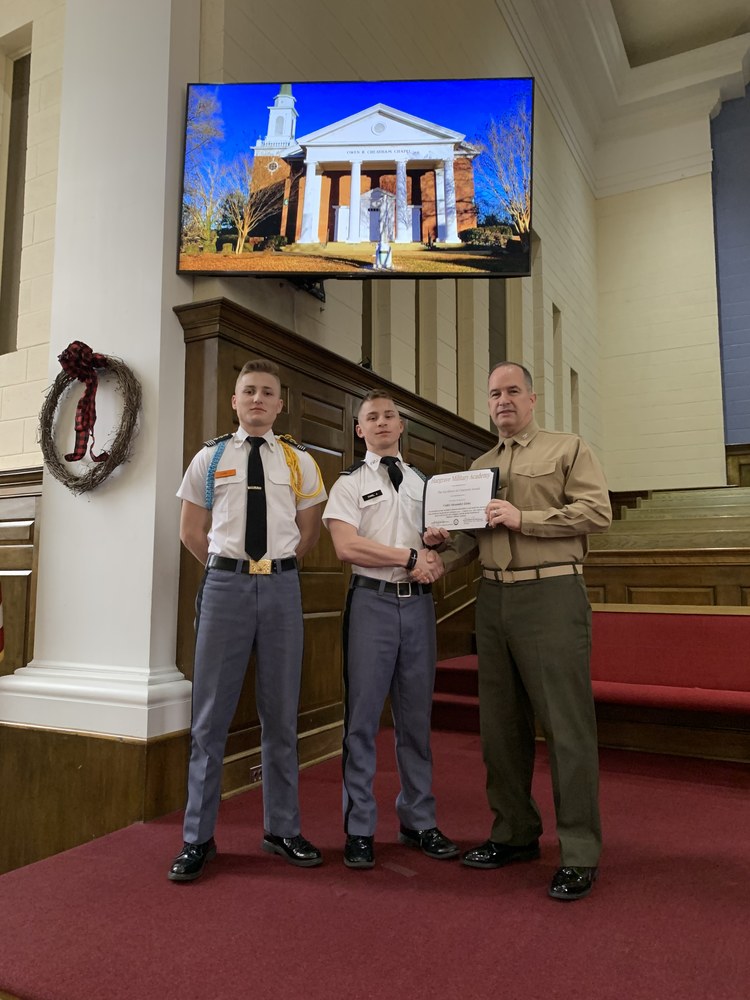 Cadet Alex Zinke ‘22, has been selected for recognition as one of our cadet's that demonstrates growth and strength in the Character Trait of Faith. As a newly promoted First Sergeant, Cadet Zinke follows a strict regimen that allows him to balance his academics with physical fitness, while deepening his Faith in God.

Alex is passionate about sharing what he knows about fitness and his faith in God, and has started a YouTube channel to help spread the word of God and to encourage others on their Faith walk.

The following is an excerpt from his nomination for this recognition: Truth is flowing from him with an angelic ease and a passion that few possess. I feel blessed to be witnessing who Cadet Zinke is becoming at Hargrave Military Academy.

Cadet Nick deVeer ‘21, was recognized for his example of the Character Trait of Knowledge, in particular for his efforts to share his expertise about swimming to Hargrave's novice  Swim Team members. Cadet DeVeer introduced competitive swimming terminology and provided tips on how to maximize workouts and overall improvement. In addition, Cadet DeVeer volunteers his time on Sundays to assist the swim coach with workouts, serves as a cadet mentor for new cadets adjusting to Hargrave, and helps his fellow cadets by tutoring them during study hall.

Hargrave cadets took a trip to Charlotte, North Carolina, to watch the Hornets face off with the Milwaukee Bucks. Although Hornets couldn't manage to keep up with the Bucks, the cadets had a blast! . Change the text. 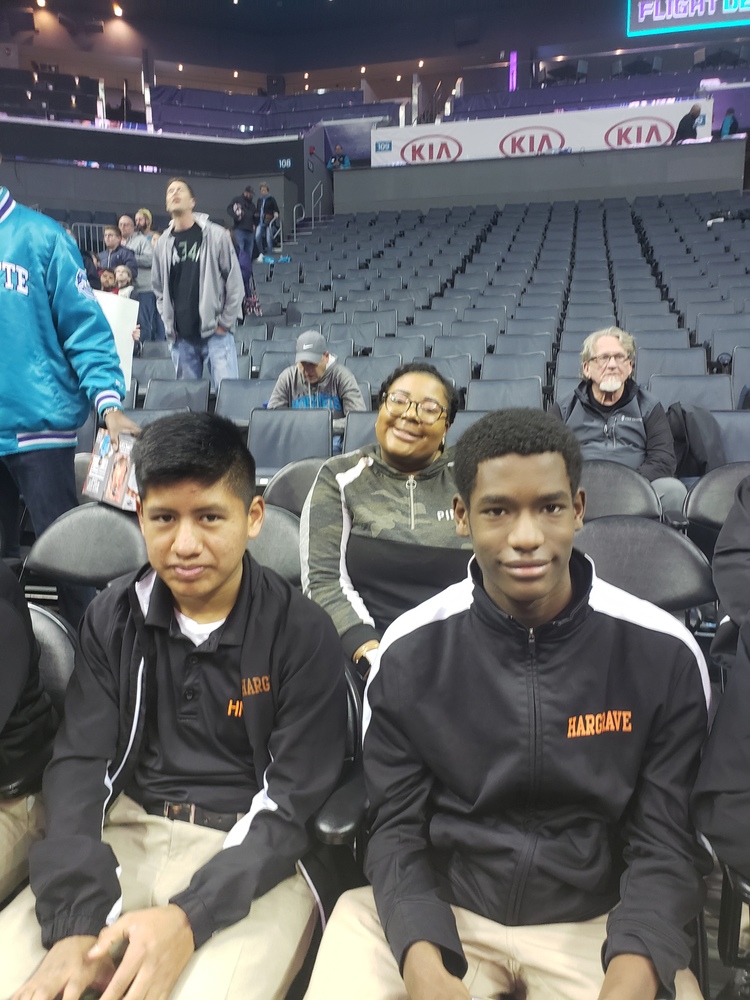 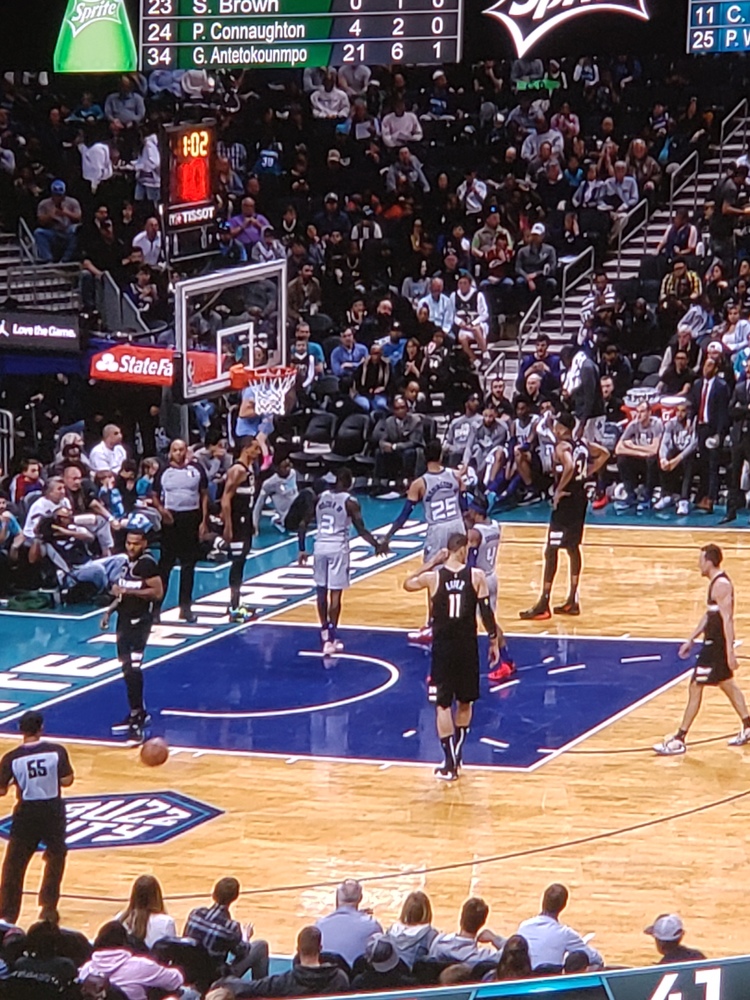 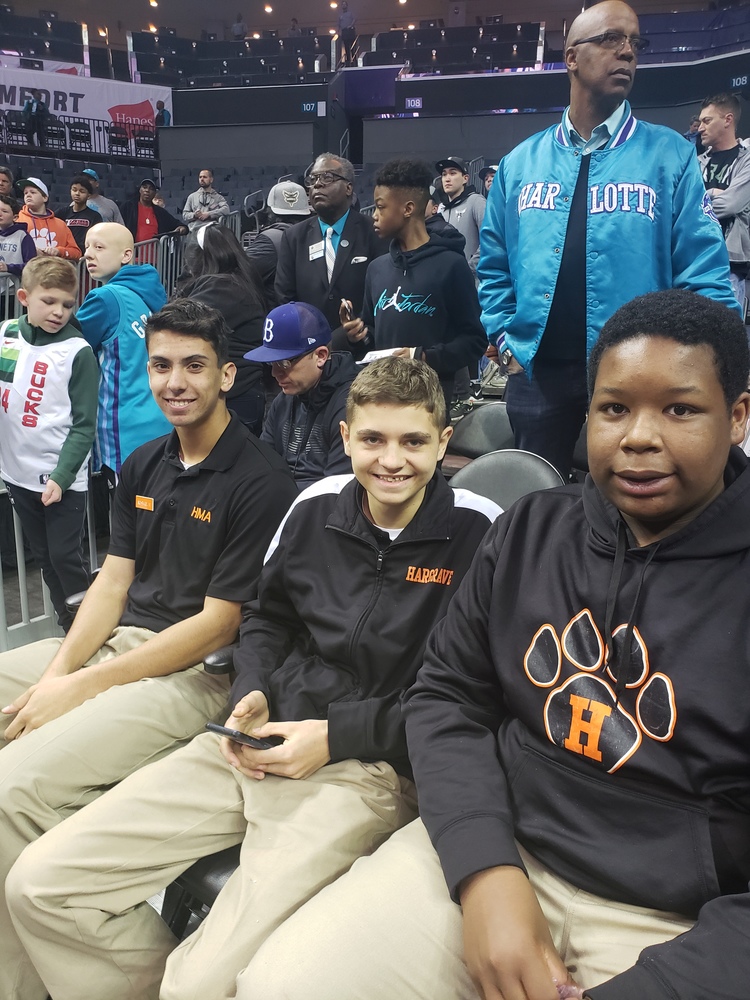 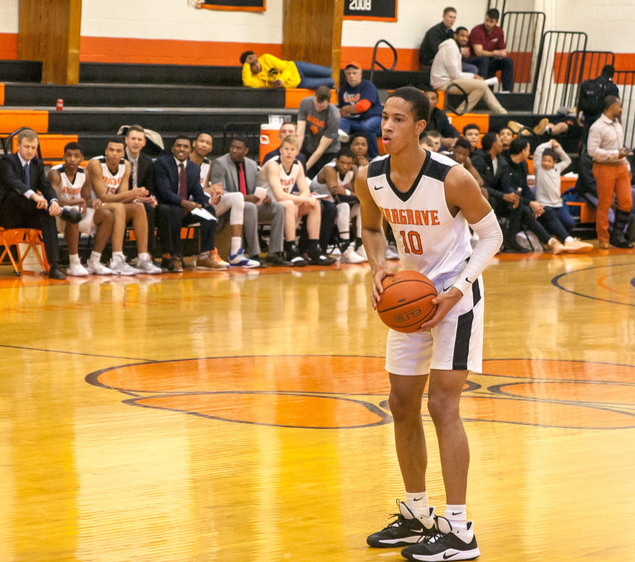 Hargrave Military Academy has lost one of its own. Post Graduate Basketball Player Ashley "A.J." James passed away early Tuesday morning. Our thoughts and prayers go out to A.J.'s friends, teammates, and family during this terribly difficult time. A.J. was a wonderful young man who will be missed dearly by all who knew him. A memorial service will be held at Hargrave at a future date.